As of this writing Google Drive’s native Mac application is not supported on M1 Macs because it is a kernel extension and those don’t run intel code on the M1 architecture.

As I have many Hazel rules that sort files into my Google Drive files, I have been trying to find a way to sync my files from my local folder.

After migrating from my Intel MacBook Pro to my M1, I tried to do some sleuthing to find where the Google Drive data was stored to see if the files were readable locally.

I found the files stored in:

Unfortunately, the files were not stored as a human-readable folder structure and instead seemed to be in another database format:

Syncing from Google Drive to a Local Folder

Syncing problems down to the Local Folder

After doing the sync down to the local folder did not sync everything. I found quite a few errors of syncing down event XLS files and with the Transmit report, it was hard to figure out why.

Hazel lets you change the folder with the “Relocate Folder…” option…

WARNING This change all my rules to use the new folder and then started to move all my pdfs that were stuck in my downloads folder since my migration to my M1 Mac.

Now that Hazel had copied my PDFs I thought the next step was going to be to upload them to transmit. Just to be careful I used the “Simulate” command in Transmit to make sure that the upload was going to work? I got some confusing results as shown in this screenshot.

The files that Transmit considered to be changed were not just the PDFs that hazel filed. This si where I got gun shy to complete the upload and have published this blog post to send to Panic to see if they have any advice. Will update it after.

If I can get the
Panic has a video about how to set up a regular sync using automator.

I saw a link to the program Insync which claims to be able to replace Google Drive file stream but I have not tried it. 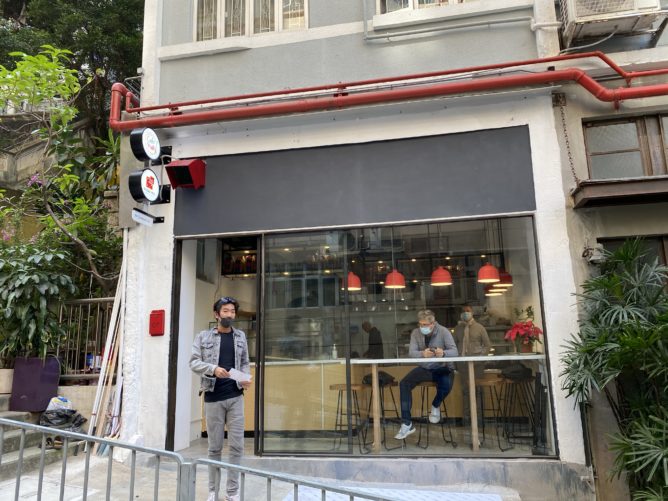 Pasta from Casa Pasta by Ermanno Lelli in Sheungwan just open and hidden up the stairs until December 31st, 2020 all kinds of pasta are 50HKD due to soft opening.

Grab your take away pasta and eat outdoors in the nearby park or cool stairs in this part of Sheungwan.

Recently did an interview with Napoleon Biggs for his Reboot Hong Kong site addressing how Hong Kong and Shenzhen can help each other reboot during COVID-19. Watch the interview on YouTube below:

I found that the Hong Kong Post office has a page where you can look up your exact Hong Kong address in English and in Chinese characters. This is called their correct addressing tool. They have additional information about Hong Kong addresses as well.

Now that I use Sidecar to turn my iPad Pro into a second screen I got a bit tired of going to the display preferences to change where my iPad was physically sitting each time. Since I am hot desking I have to put it on the left or the right and that changes almost daily.

Originally, I thought I would fix this would Keyboard Maestro but it can’t change the display layout and it is too hard to automate it to do the preferences.

I found a stack exchange thread with a link to displayplacer. This is a command line tool that can be installed by homebrew which will do the job of display preferences.

After following the instructions to install the tool you can capture your current screen configuration and then run a command to switch.

I created a Keyboard Maestro macro that monitors when the iPad is plugged in and then prompts me to turn on sidecar and choose the side of the desk where the iPad sits.

The Lung Wah Hotel restaurant, loved by film stars including Bruce Lee and famous for its roast pigeon, is celebrating its 70th anniversary next year, and has big plans for the future.
— Read on www.scmp.com/lifestyle/food-drink/article/3106864/restaurant-loved-bruce-lee-famed-its-roast-pigeon-and-featured

My first job out of college brought me to New York City to setup around 10 G4 cubes as web servers for an Ecommerce company. These beautiful machines fit well on the racks.

There may have never been a Mac more aligned with Steve Jobs
— Read on www.relay.fm/20macs/13